University of Colorado at Boulder

Responsibilities:  All those below plus responsibility for all library information services, non-library tenants, and building policies of Norlin Library (the main library); includes responsibility for developing and overseeing a new East Asiatic Library and all CJK cataloging; liaison with the Boulder Faculty Assembly Library Committee.

University of Illinois at Champaign-Urbana

Planning Committee, RASD (1989 - 1991). To review the Division's structure and make recommendations for change.

Committee on Development, Organization, Planning and Programming, LAMA, (1982 - 1983 member; 1983 - 1984 chair). All reports and projects as assigned by LAMA/Systems and Services Section.

Organization Committee, RASD (1980 - 1982), Chair. All reports and projects as assigned by RASD Board.

International survey of use of LC Subject Catalog in conjunction with Library of Congress 1976; ALA Annual Conference Program, "Public Service and the Online Catalog," Detroit, 1977; ALA Mid-winter Hearing, "Closing the Library of Congress Card Catalog," Chicago, 1978; ALA Annual Conference Workshop, "Commercial COM Catalogs:  How to Choose, When to Buy," Chicago, 1978.

David F. Kohl. "Not Change to...Change! The Last 40 Years in (Academic) Librarianship and What it Tells Us."  International Journal of Knowledge Content Development and Technology.  (December, 2015) pp. 3-7.

David F. Kohl. “Consortial Licensing vs. Tradition: Breaking Up is Hard to Do” Learned Publishing – The Journal of the Association of Learned and Professional Society Publishers. 16:1 (2003) 47-53

David F. Kohl. “Learning from our Experiments: The Remarkable Implications of OhioLINK and HEAL-Link Electronic Use Data for Collection Development.” In [Conference Proceedings] Management in Academic Libraries,  Greece: University of Macedonia, 2002.  27-34.

David F. Kohl. “To Select or Not Select: Taking Off the Blinders in Collection Development,” in  2000 Charleston Conference Proceedings: Is Bigger Better?  Ed. Rosann Bazirjian and Vicky Speck.  Charleston, SC: Against the Grain Press, 2000. 25-33.; also reprinted in Collection Management 26:2 2001.

David F. Kohl. “Redefining the Academic Library for the 21st Century: Citizenship in the Bibliographic Polis,” in Proceedings of the 7th Greek Conference of Academic Libraries. Volos, Greece. Nev. 4-6, 1998.

David F. Kohl. "A Populist Approach to Automation:  Developing Local Systems in a Mainframe Context." in Energies for Transition:  Proceedings of the Fourth National Conference of the Association of College and Research Libraries. Danuta A. Nitecki, editor.  Chicago: American Library Association, 1986.

Indexing and Abstracting:  An International Bibliography. In RQ 20:4 (Summer, 1981).

Invited Speaker, "Toward a New Understanding of the Library Mission: Vision and Implementation," International Conference on Academic Libraries: Vision for the Future, University of Delhi, New Delhi, India, October 5-8, 2009.

Invited Speaker, "The Evolution of the Journal as a Vehicle for Scientific Communication: Wrestling with Proteus," CALSI Workshop: A Decade of Digital Journals, Valencia, Spain, November 15, 2007.


Invited Speaker, “Staying Off the Chopping Block: How Librarians Decide to Cancel Journals and What Your Society Can Do to Stay Off ‘the List’,” Wiley/Blackwell Executive Seminar for Society Heads, National Press Club, Washington, D.C., June 15, 2007.

Invited Presentation, “2+2=6: The Power of a Consortium for the Future,” Conference of Academic Libraries III, University of Porto, Porto, Portugal, June 20, 2005.

Invited Debater, “Be it Resolved: It is Time to Kill Print,” Society for Scholarly Publishing, Baltimore, MD, May 30, 2003.

Invited speaker, “The Big Deal and How to Fund it,” Aristotle University, Thessaloniki, Greece, May 15, 2002.

Keynote speaker, “What if What We Know, Isn’t True: Selection, Collection Development and Usage,” (series, 2)E-Books and E-Journals Conference, NELINET, Amherst, MA.  May 22, 2001

Invited speaker, “Scholarly Communication Today: What’s Wrong and What You Can Do About It,” Open Meeting on SPARC. London, England. February 21, 2001.

1985        Co-investigator, National Agriculture Library Grant, University of Illinois, $30,000 to investigate the feasibility of providing USDA publications online through use of photocomposition tapes and to demonstrate the process and to produce a sample online publication.

1983        Co-recipient of the University of Illinois AMOCO Special Award awarded through the office of the Vice-Chancellor for Academic Affairs) for development of an outstanding program of undergraduate instruction (first time a library faculty member had received this award).

1983        Co-investigator, General Electric Grant through the Association for Research Libraries, $5,000 to study the impact of widespread access to personal computers on information needs and uses of academic library patrons.

1982        Co-recipient, Undergraduate Teaching Award, University of Illinois, $4,000, to expand and diversify the Undergraduate Library Bibliographic Instruction program (one of six awards given campus-wide and the first time library faculty had received such an award).

1979 - 1980    Selected to be an assessor in the Assessment Center Program, a management development program jointly sponsored by the University of Washington and the Washington State Library which helps library professionals interested in management to assess their strengths and weaknesses and plan a specific program for enhancing their management skills and strengths.

1979 - 1980    Selected to be a facilitator in Washington State University's "Managing for Productivity" program (12 facilitators were selected university-wide to use a 10-week commercial management package to help employees upgrade their management skills; led several programs both in and out of the library). 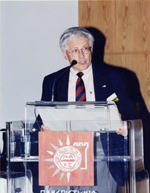 "Libraries in the digital age are experiencing the most profound transformation since ancient Mesopotamian scribes first began gathering and organizing cuneiform tablets."